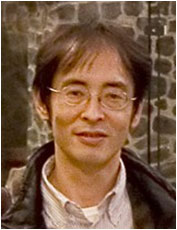 Prof. Satoshi Kamiyama received the Ph. D. degree in 1995 from Nagoya University. From 1985 to 1988, he was a member of technical staff at Central Research Laboratory, Omron Co. Kyoto, Japan, participating in the development of semiconductor AlGaAs-based opto-electronic devices. From 1988 to 1999, he joined Central Research Laboratory of Panasonic Co. Osaka, Japan, where he was pursuing research in the field of semiconductor lasers including red, green and blue-violet lasers. Since 1999, he has been a member of technical staff in Meijo University in Nagoya, Japan, where he conducted research of group-III nitride materials and devices in the group of Prof. Akasaki. He became an associate professor at Meijo University in 2001, and was promoted to professor in 2007. His experience covers all the semiconductor opto-electronic devices, such as bulk crystal growth, epitaxial growth (LPE, MBE, and MOCVD), de-vice processing, device physics, and theory. Prof. Kamiyama is a member of the IEEE, SPIE and the Japan Society of Applied Physics.